15 NovWhy visit for 36 hours when you can live here

A weekend in the Mile High City offers something for everyone: a flourishing restaurant scene, microbreweries, miles of trails for skiers and bikers alike, and a vibrant street art movement.

In the last seven years, Denver’s population has grown by more than 100,000, a boom many new residents credit to the sunny weather, proximity to the Rocky Mountains and density of cultural attractions. With that growth has come not only construction cranes, but also improved transit systems, including a convenient new light rail line linking the airport to downtown over 23 miles away, dispensing with the need for rental cars over weekend visits. Visitors using the train alight at the renovated Union Station in the heart of a city filled with new breweries, expanded museums, a burgeoning street art movement and an explosive culinary scene producing thematic food halls and destination meals from brunch through dinner. There’s always the chance to walk, cycle, run or ski it off over hundreds of miles of recreational trails. And if your flight is delayed, there’s a free ice-skating rink at Denver International Airport from Nov. 23 to Jan. 6.

The Denver Art Museum, with its distinctively angular Daniel Libeskind-designed wing, anchors what has turned into the city’s museum quarter now that the Kirkland Museum of Fine & Decorative Art moved in two blocks away. The quirky museum (admission $10), which doubled its exhibition capacity, preserves the original studio of Vance Kirkland, who often painted suspended on straps above his canvases. Before reaching it, visitors pass through the encyclopedic collection of decorative pieces from Art Nouveau tapestries to postmodern sofas that crowd the walls and floors, salon-style. A moving union of art and architecture lies between the Denver Art Museum and the Kirkland in the Clyfford Still Museum (admission $10). Brad Cloepfil of Allied Works Architecture designed the minimalist, textured concrete building, with naturally lit galleries to house the nearly complete collection and archives of the abstract expressionist painter Clyfford Still.

Denver’s culinary mania is evident in brunch queues and difficult-to-get dinner reservations. Make one of those reservations well in advance for Tavernetta, a new, sophisticated Italian magnet from the group behind Frasca Food and Wine in nearby Boulder. To get to the tables, diners walk through the kitchen, a scenic appetizer to the chef Ian Wortham’s regional and seasonal dishes, which recently included homemade garganelli pasta with mushrooms and asparagus ($32) and roast quail with farro, chickpea and prosciutto ($28). No reservation? Try Tavernetta anyway. There’s a spacious lounge with fireside tables as well as numerous stools around the bar.

Despite Denver’s plethora of breweries, beer isn’t the only drink in town. From the hidden to the see-and-be-seen, the selection of cocktail lounges warrants a nightcap or two. In Lower Downtown, a.k.a. LoDo, hit the rejuvenated Union Station and find the mezzanine to reach Cooper Lounge, where sofas offer great perches for admiring the grand 1914 station. In the polished Cherry Creek neighborhood, look for a gold doorbell in an alley behind the Halcyon Hotel to find B&GC, a stylish subterranean lounge with carefully crafted drinks such as the bourbon-maple Distant Lover ($15). In the River North Art District, known as RiNo, New York’s cult mixologists Death & Co are newly spiking the cocktail scene in a clubby room with grand chandeliers and a menu the size of a novel.

Backed by the Rocky Mountains to the west, the Mile High City tends to draw outdoorsy types. Cycling the Cherry Creek Bike Path, a 40-mile path along the tributary, is one of the easiest ways to join the athletic crowds here. It links up with the nearly 30-mile Greenway Trail along the South Platte for more ambitious riding. Rent a Denver B-cycle from the citywide bike share system from more than 85 stations around town (from $9 for a 24-hour pass). Biking is a year-round sport in Denver, which tends to be dry, but on snow days the cross-country skis come out.

Perhaps because of all that early morning exercise, brunch is a popular meal. In the LoHi, or Lower Highlands, area alone, choices include the butchery- and seafood-centric Old Major, the fried-chicken star Low Country Kitchen and the Latin American cantina Señor Bear. An atmospheric choice, Linger occupies the former Olinger mortuary, a vast, warehouselike space with multiple levels offering good views of downtown. Global brunch dishes include breakfast dosa ($16) and “hangover ramen” ($17), accompanied by bottomless mimosas ($15).

Denver has some nice neighborhoods for boutique shopping, including Highlands and Berkeley, but the opening of the Source Hotel and Market Hall in RiNo next to the Source food hall has given shoppers a place to do some concentrated browsing of wares from local artisans. The hotel’s second story serves as a retail market hall, home to shops and kiosks from Winter Session, a Denver-based leather goods maker; Vinyl Me, Please, a local record dealer; and the sunglasses and ski goggles brand Native Eyewear, based in nearby Longmont. You’ll find them alongside carefully curated out-of-towners, including the street-art-focused Station 16 Gallery from Montreal and the design goods shop Poketo from Los Angeles.

The home of the sprawling Great American Beer Festival each fall, Denver has long been a champion of the microbrewing revolution. While the Denver Beer Trail has over 100 entries on its map, several are clustered in RiNo making a progressive tour a pedestrian affair. At Our Mutual Friend, a friendly taproom, state flags on the menu indicate Colorado-grown barley and hops, including Colorado Pale Ale and Dad’s Brown Ale (pints $6). Down the street, the industrial Ratio Beerworks, which sometimes serves a refreshing Handwritten wit ($6), rolls up garage-style doors on its popular patio. Nearby, the beloved Ft. Collins brewery O’Dell Brewing Co., opened a cozy two-story taproom in view of a mural depicting hops covering the side of its historic brick building.

The RiNo district also teems with culinary intrigue, from the new Super Mega Bien serving Mexican tapas dim-sum style to the contemporary wood-fired grill Acorn. Because reservations are hard to come by, hit Hop Alley early. The chef Tommy Lee, who also runs Uncle, a ramen-specialist in LoHi, serves regional Chinese fare with a focus on fine ingredients and the use of a wood grill in a former soy sauce factory where hip-hop commonly rings out across the lively dining room. Most of the vegetable, protein, noodle and rice dishes seem designed to share, including savory kung pao cauliflower ($15), grilled octopus with spicy gochujang sauce ($27) and garlic shrimp noodles ($23). Several of the cocktails come in large-format shareable sizes too.

There’s a warm, slightly retro vibe to Nocturne jazz club where an intriguing artist-in-residence arrangement books musicians for multi-week runs, encouraging them to explore the music of a jazz legend, concentrate on a genre or produce their own original compositions. Brick walls and high ceilings with exposed ductwork don’t interfere with the sound quality coming from the raised stage that is the focal point of the music venue, which also acts as a supper club serving a full menu. Reservations include a cover fee (varies) and the bar is as careful with its cocktails as the musicians are with their playlists.

Get the Travel Dispatch Newsletter

Every Saturday, get travel tips, destination coverage, photos from all over the world and more

Eyes Open, a boutique at the Source Hotel and Market Hall.CreditBenjamin Rasmussen for The New York Times 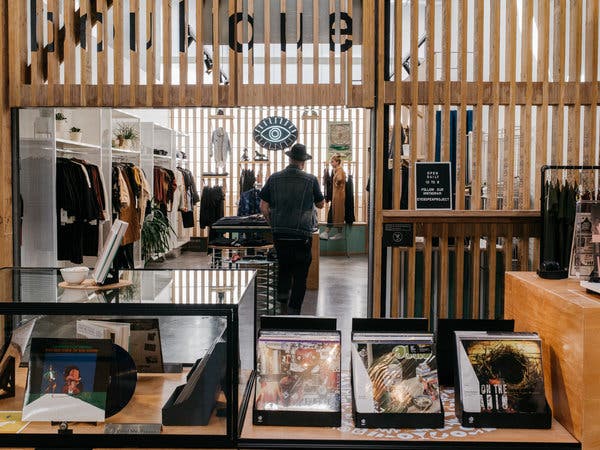 To the casual pedestrian, Denver doesn’t appear rich in street art. Trust Erin Spradlin and James Carlson to show you the significant treasures on the walls and in the alleys of the River North Art District on their Denver Graffiti Tour. Inspired by a mural tour they took in Bogotá, Colombia, the pair launched their tour this spring (it runs year-round). The two-hour itinerary introduces memorable works by Gamma and Jeremy Burns. The guides distinguish street art or murals from more haphazard graffiti in their thoughtful discourse that covers artwork mining topics from political to comic. The tour ends in a hidden alley covered in a murals and popular with selfie shooters.

Food halls seem to be popping up everywhere, including the new Denver Milk Market in LoDo, and in new iterations, such as the micro-distillery-centric Booz Hall in RiNo. The beauty of the collection of food stalls at the new Zeppelin Station is management’s effort to fill the vast shed-like development on a light rail line with ethnic foods not easily found elsewhere. The local favorite Vinh Xuong Bakery opened a stall in Zeppelin serving its signature banh mi sandwich served with housemade chili sauce ($8.75). There’s Indian street food at Namkeen, fried chicken at Injoi Korean Kitchen and smoked meats at Au Feu. Finish with a scoop of velvety chocolate from Gelato Boy ($4.45) while listening to live music on Sundays and, on select Sundays, watching the Denver Broncos on a big screen.

Denver was on our list of 52 places to go this year.
The 52 Places Traveler: In Denver, a Mile High but Down to Earth 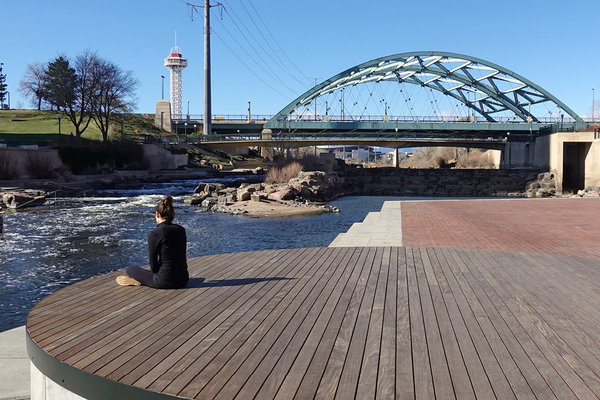 The new Ramble Hotel in RiNo looks like a warehouse rehab with a handsome red brick exterior and double-height lobby. The new building houses Death & Co Denver cocktail lounge in the lobby, filled with tufted sofas and chandeliers. In addition to its 50 cozy rooms, the Ramble houses a theater, the Mexican restaurant Super Mega Bien and a coffee bar. Rooms from $249; 1280 25th Street, theramblehotel.com.

Rent a loft downtown or an apartment in the Highlands, to name two central areas with ample inventory on HomeAway.com. Lofts in LoDo, walking distance to Union Station and other attractions, start at $87. A one-bedroom apartment in LoHi, or Lower Highlands, a mile from downtown, costs $111.